So you are looking for information all about Pakistan, you are at the right place where you can get comprehensive information about The Islamic Republic of Pakistan, a densely populated country in South Asia.

As you may know Pakistan emerged on the world map on 14 August 1947. It is the land I proudly call My Home. Pakistan is where I live, breathe, eat, sleep. The Flag of Pakistan is our pride. May Allah Almighty keep it flying high forever.
I have made an attempt to appraise my fellow countrymen and women, especially the youth, about the tremendous potential of Pakistan in terms of natural and human resources.
The Pakistani nation is vibrant, culturally rich, hospitable, friendly, and contrary to common western beliefs quite tolerant.
It has been almost 75 years since the creation of Pakistan. During this period, we as a nation have witnessed, for a majority of the period, trials and tribulations. Wars, natural disasters, terrorism, corruption, poverty, religious extremism, illiteracy, decaying social fabric, and unemployment plague us today.
In terms of social indicators, we are behind even those countries which gained independence after 1947.

A great majority of the people of Pakistan have firm faith in destiny and divine intervention. They believe that the trials and tribulations they are facing today are all temporary. There is also the realization that they are a young nation and will require some time to mature.

Nations pass through trying times and have to learn through their mistakes. Pakistani engineers, doctors, scientists, educationists, social activists, and sports persons have done wonders and have achieved laurels for the motherland.

With a vast stretch of fertile land, young, intelligent, and hardworking human resources, in addition to the tremendous amount of natural resources, the nation stands a fairly good chance of achieving greatness and prosperity for its people.

We got it after great struggle and sacrifices together with The Quaid e Azam Muhammad Ali Jinnah who is a real hero of Pakistan.

To maintain its existence, Pakistan has always struggled to achieve political stability and social development.

The History of Pakistan 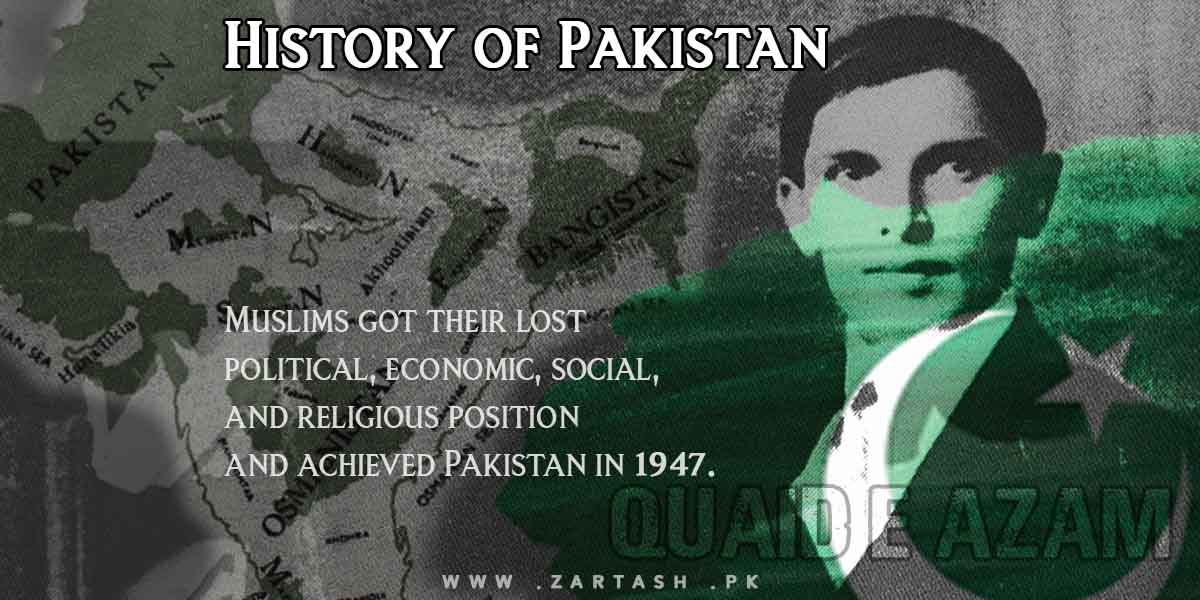 Islam took over most of the Indian subcontinent in the 12th to 16th centuries, although there were limited Muslim incursions from the 8th century into modern Afghanistan and Pakistan.

Prior to the conquest of India by the British East India Company, the Muslim Moghul Empire was able to subjugate most of India’s Hindu kings. However, few parts in the upper reaches of the Himalayas and the extreme south remained under the rule of Hindu kings.

Pakistanis widely believe that the foundation of modern-day Pakistan was laid in 712 A.D. When The Arab conqueror Mohammad Bin Qasim arrived in Sindh and defeated Raja Dahir.

The Quaid-e-Azam Mohammad Ali Jinnah acclaimed the event:
“the Pakistan Movement started when the first Muslim put his foot on the soil of Sindh, the Gateway of Islam in India.”

The Pakistan movement and The Islam are synonymous. The emergence of Pakistan on the world map as an independent country is a clear manifestation of the love the Muslims of the religion have for their faith.

The failure of the movement did not dampen the spirit of Muslims. During this time of distress and disarray, Sir Syed Ahmad Khan emerged as a ray of hope for the Muslim Nation of the sub-continent.

Sir Syed declared that the Muslims could improve their political, social, and economic condition only through the medium of modem and scientific education.

Sir Syed Ahmad Khan cultivated the concept of a separate Muslim Nation on the basis of religion, culture, and history. He was the first leader who inspired the Muslims of the sub-continent to demand a separate homeland where they could lead their lives freely according to the dictates of the Holy Quran and Sunnah.

The concept is commonly known as the “Two Nation Theory“.

This theory was later propagated by Sir Allama Muhammad Iqbal, the great Muslim Poet, and Philosopher, who dreamt of a separate homeland for the Muslims of the sub-continent. Pakistani nation celebrates Iqbal day every year and gives tributes to his efforts.

Quaid -e-Azam Muhammad Ali Jinnah was initially a great believer in Hindu-Muslim unity. He, at first backed the idea of one separate India free from the British rule, Muslims and Hindus living together and side by side.

Quaid-e-Azam Mohammad Ali Jinnah left the Congress Party because he felt the party was not fair to Muslims, as dominated by Hindus.

Because of this, Quaid-e-Azam left the Congress Party and joined the All India Muslim League. He felt that when India would gain independence from the British, the British Raj would be replaced by Ram Raj, and Muslims would have no voice left and would be defenseless.

The Congress was the party of Hindus. Through the All India Muslim League, Muslims got their lost political, economic, social, and religious position and achieved Pakistan in 1947. But in 1971, due to the conspiracies of significant powers, his right-hand East Pakistan was lost. And he appeared on the map called Bangladesh, where there were 65% Muslims.

The Quaid was convinced that the only way for Muslims and Hindus to live peacefully was separate as two different nations. Initially, this was the idea of the great Muslim philosopher and thinker, Dr. Allama Iqbal.

As a result, In Lahore, the Pakistani regime declared the Pakistani plan on 23rd March 1940. This declaration was called the Lahore Resolution or better known as Pakistan Movement. Thus the struggle for Pakistan began.

When the time came for dividing the land between Pakistan and India it was decided that the Muslim majority areas would become Pakistan, and the Hindu majority areas India.

The plan for the territories had been made and agreed upon by both parties, but Viceroy Lord Louis Mountbatten teamed up with Jawarlal Nehru and changed the map and gave India the areas which were supposed to go to Pakistan causing millions of people to migrate from Pakistan to India and also from India to Pakistan.

Also, Mountbatten and Nehru played foul by making the Kashmiri ruler sign backdated and fake papers, which allowed India to land its forces in Kashmir and take control.

Pakistan was carved out of the subcontinent on the 14th of August 1947. The story of the struggle for independence from British rule is full of heroics and of sacrifices.

The Quaide Azam was helped by a large number of prominent personalities which include Sardar Abdul Rab Nishtar from the Frontier, Qazi Muhammad Isa, and Nawab Muhammad Ayaz Khan Jogezai from Baluchistan, Sir Abdullah Haroon from Sindh, Nawab Iftikhar Hussain Mamdot, and MianMumtaz Daultana from Punjab.

Pakistan is one of the few countries in the world with a geological structure. The geography of Pakistan consists of beautiful scenery. It has got all the natural wonders from hot deserts to freezing glaciers, plains to mountain ranges, coastal areas to forests, beautiful lakes to long rivers. These include fields, deserts, forests, mountains, and plateau.

The Arabian sea and the Karakoram mountain range are located in the north of Pakistan.

The irrigation system of Pakistan is the world’s largest irrigation source. Pakistan‘s well-being is dependent on it, being an agrarian economy. The river system consists of five major rivers which are Indus, Chenab, Sutlej, Jhelum, and Ravi. In addition, there are a significant number of other small rivers as well.

Pakistan is bordered by Iran to the West, Afghanistan to the northwest, and India to the east while China borders the country in the northeast. Its capital Islamabad is located in the foothills of the country’s northern part of the Himalayas. Its largest city is located on the coast of the Arabian sea in Karachi south.

The Provinces of Pakistan

As far as the biggest province of Pakistan in terms of population is concerned, the land of five rivers Punjab is the province having the largest population.

The Climates of Pakistan 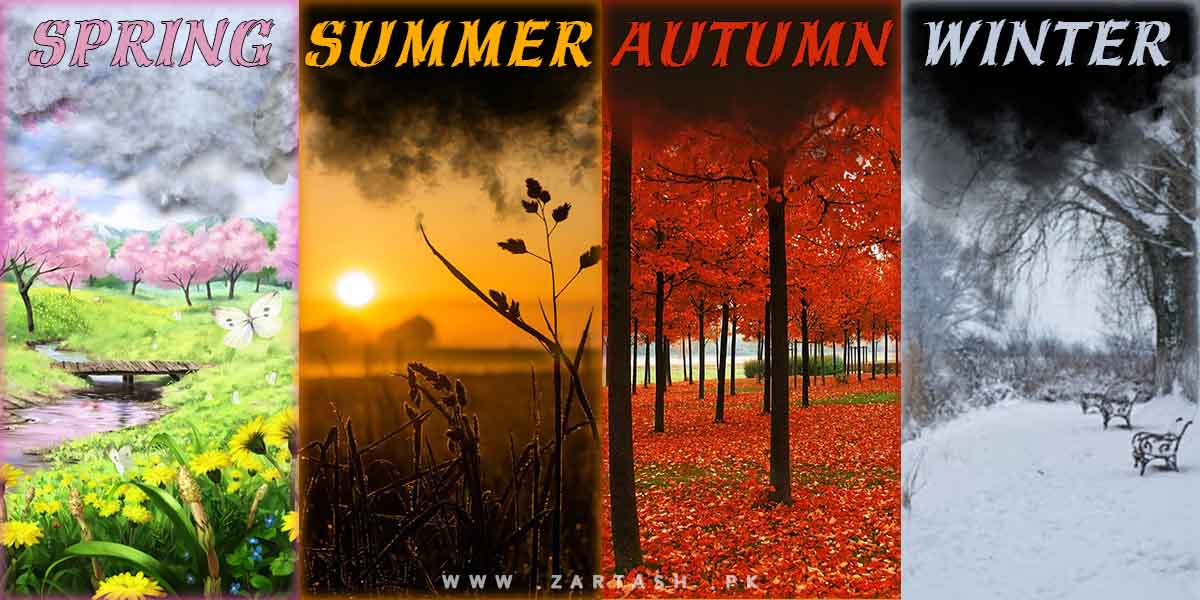 There are four seasons in Pakistan.

A cool, dry winter from December through February; a hot, dry spring from March through May; the summer rainy season, or southwest monsoon period, from June through September; and the retreating monsoon period of October and November.

Rainfall varies from year to year, resulting in at times floods. Periods of no rain are also common which results in droughts.

Since Pakistan is located north of the tropic of Cancer between latitudes 24° and 37° N, its climate is continental as shown by its extreme seasonal variation in temperature as well as the extreme daily temperature variations.

Temperatures on the Balochistan Plateau are higher, whereas, the weather is altered by sea breezes in the coastal part of Sindh and Baluchistan.

Because of the elevated altitude, the summers in the greater northern part of the country are quite mild, while the winters are harsh. In the rest of the country, average temperatures during June are 38 °C (100 °F) in the plains, the highest temperatures can exceed 47 °C (117°F).

In the summer, hot winds across the plains during the day. The dry, hot weather is broken occasionally by dust storms and thunderstorms that temporarily lower the temperature.

The Population of Pakistan

Pakistan is the 2nd most populous Muslim majority country. About 97% of Pakistanis are Muslims. The white in the Pakistani flag represents its minorities. Pakistan‘s minorities include Hindus, Christians, each with a population of almost 3 million.

Pakistan, with 177.1 million people, is the 6th most populated country in the world. At the time of partition in1947, Pakistan‘s population was 32.5 million.

Pakistan covers an area of 881,913 km2 (340,509 sq mi), something like the same as the join-together land areas of France and the United Kingdom. It is the 33rd-largest nation by the whole area, while this ranking varies depending on how the unclear territory of Kashmir is counted.

The Literacy rate in Pakistan

The literacy rate sort from 85% in Islamabad to 23% in the Torghar District. Literacy rates vary regionally, on the whole, by sex. In ethnic areas, female literacy is 9.5%, while Azad Jammu and Kashmir have an aliteracy rate of 74%.

The Education in Pakistan 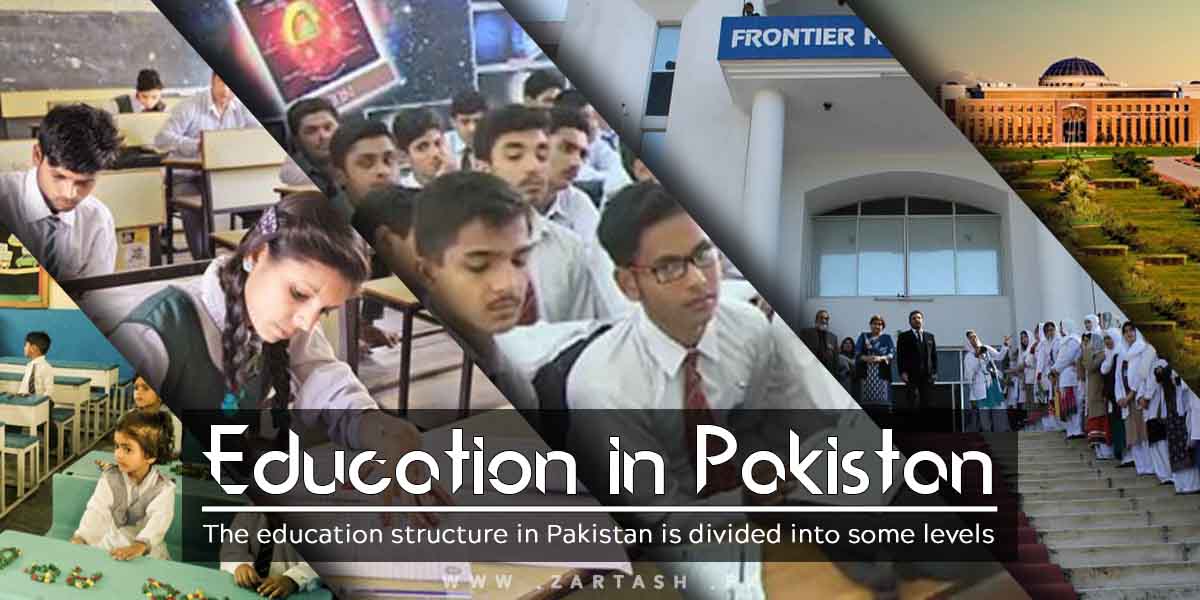 The education structure in Pakistan is usually divided into some levels;

The Languages in Pakistan

Pakistan’s national language is Urdu, and the official language is English. Pakistan also has a number of regional languages. Punjabi, Saraiki, Pashto, Balochi, Gujar, Kashmiri, Hinko, Brahui, Shina, Balti, Khowar, Dhatki, Haryanvi, Marwari, Wakhi, and Burushaski are some of them.

The Religion of Pakistan

Pakistan is the state of Islam, and as regards, 95.98% of Pakistanis are Muslim. Pakistan has the second most significant number of Muslims in the world after Indonesia. The common are Sunni 75.95% with an expected 6% Shia.