Do you plan to visit the world’s most attractive places? Those of you who are interested in tourism will be interested to learn about a country that has breathtaking sights and moves the heart; that is Pakistan. But, is Pakistan a Safe country, this question may arise instantly in your mind, and your desire to see the most beautiful places in Pakistan lets to incomplete your dreams and leads to heartbreak.

Is Pakistan a Safe Country to travel? Of course, yes. But here is another question arises that:

What are the reasons due to which Pakistan became a suspicious country in front of foreigners?

Why did Pakistan call a danger for peace in the region?

Pakistan itself is a sign of peace then how opponents became successful to attach the worse of terrorism with Pakistan?

I will explore all the facts with deep studies and research, and then the decisions will be yours.

So at first, let’s start with some of the reviews of foreign tourists who visited Pakistan.

What the Foreigner Visiters Say About Pakistan?

Pakistan is a place that captures international attention. Hundreds of foreign tourists visit Pakistan every year. The tourism industry in Pakistan is increasing day by day. Here is the list of some foreign travelers who visited Pakistan. Come and Let’s hear what they have to say about Pakistan:

“Forget your fears – go visit Pakistan. It’s far from the easiest country to travel in, but you’d be hard-pressed to find a more hospitable country of people. Add to that rich cultural history and diversity, stunning nature, and you have a perfect destination for adventurous spirits. Just do it. You won’t regret it.”

Sophee Southall is an Australian tourist and blogger. She said:

“Upon arriving in Pakistan, I was quite nervous. Will I accidentally offend the locals? As a woman, should I keep my mouth shut at all times? Will Pakistanis act aggressively towards us because we’re Westerners? Are we driving straight towards danger? These were some of the thoughts running through my head at the time.”

“A journey to Pakistan isn’t a holiday; it’s a life-changing adventure, an education and an off-the-beaten-track experience you’ll never forget. Expect to be surprised, moved, inspired, challenged and supported. Enhance your journey by traveling with an open mind, a beaming smile and a warm heart. Pakistanis will return your optimism and kindness a thousand times over.”

Geographically Pakistan is located in a place on the earth that is endowed with the beauty of its high mountains, deep valleys, breathtaking waterfalls scenes, and other natural attractions. So if you are doubtful by thinking is Pakistan a safe country or not, then it is nothing other than bull shit. read the Eva Zu Beck comments what she said about Pakistan in the link.

Cynthia Ritchie belongs to the US. She said:

“Pakistan is one of the most geographically diverse countries in the world. From the convergence of the world’s three largest mountain ranges: The Himalayas, Hindukush, and Karakorum; to charming European-type villages; expansive forests; to salt mines, desert planes below sea level. The various cultures and sub-cultures are endless. It’s also an archeologist’s heaven! I fulfilled a lifelong dream of being an archaeologist on an active dig site uncovering an ancient Buddhist monastery.”

What did Queen Elizabeth’s Family say about Pakistan?

The British Royal family has visited Pakistan many times. Queen Elizabeth II along with her husband, arrived in Pakistan in 1961 for the first time. In October 1997 she came to Pakistan again and said Pakistan seemed like her own home.

Princess Diana the world’s most beautiful lady who conquered the heart of countless people with her kind nature. She got fame around the world. Overall Princess Diana visited Pakistan three times. First in 1991, then in February 1996 and last time in May 1997.

Finally, in October 2019, Prince William and Kate Middleton arrived in Pakistan. Prince William is the Grandson of Queen Elizabeth II. The royal couple met with the prime minister and spent a memorable time. Their visit promotes the safety impact of Pakistan in front of the world.

An American woman visited Pakistan. she enjoyed the hospitality and confessed that she is feeling ashamed of the doubts that she thought about Pakistan before arrival. After returning back to her homeland, she expressed her feeling in front of the audience and sang some lines of a poem that was written by Allama Mohammed Iqbal.

Allama Mohammed Iqbal is the national poet of Pakistan. His poems have been sung by children on different occasions especially when the nation celebrates Iqbal day. He is one of the real heroes of Pakistan.

Pakistan is a country that always stands with Oppressed people. On several occasions, Pakistan has raised its voice for the rights of Kashmiris, Palestine, and the people of Sham. The sympathy of Pakistan with these Muslim countries is unbearable for the non-Muslims living in the neighborhood of Pakistan.

Imran Khan’s speech at united nation 2019 covered a big-time while speaking on the Cruelty happening on the Kashmiris by India. This speech depicts the sorrow and injustice that the Kashmir population is facing.

Moreover, the whole world is familiar with the situation facing our Palestinian brothers. The atrocities against the Palestinians in Israel have no limit. Pakistan always condemns the cruelty and on 21 May 2021, Palestine solidarity day was observed in Pakistan.

It is the responsibility of the media to bring the true news of the atrocities against Muslims in Kashmir and Palestine to the people and expose the oppressors. Pakistan has always raised its voice against oppression and Pakistan’s efforts to give rights to the oppressed are appreciated. The media must convey the role of Pakistan to the world in the appropriate way.

Recently, In October 2020, Indian media started to share a disinformation Campaign on Twitter that there is a civil war held in Pakistan. This was false news having no truth, just was a Conspiracy to build a wrong image in front of the world.

Have a look at this screenshot: 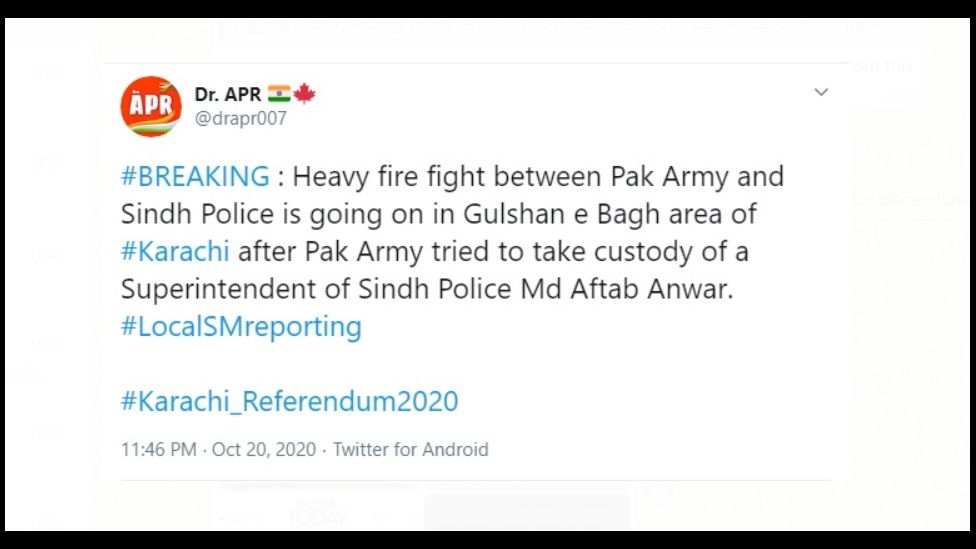 The president of Pakistan, Arif Alvi demands serious discourse on this false news. 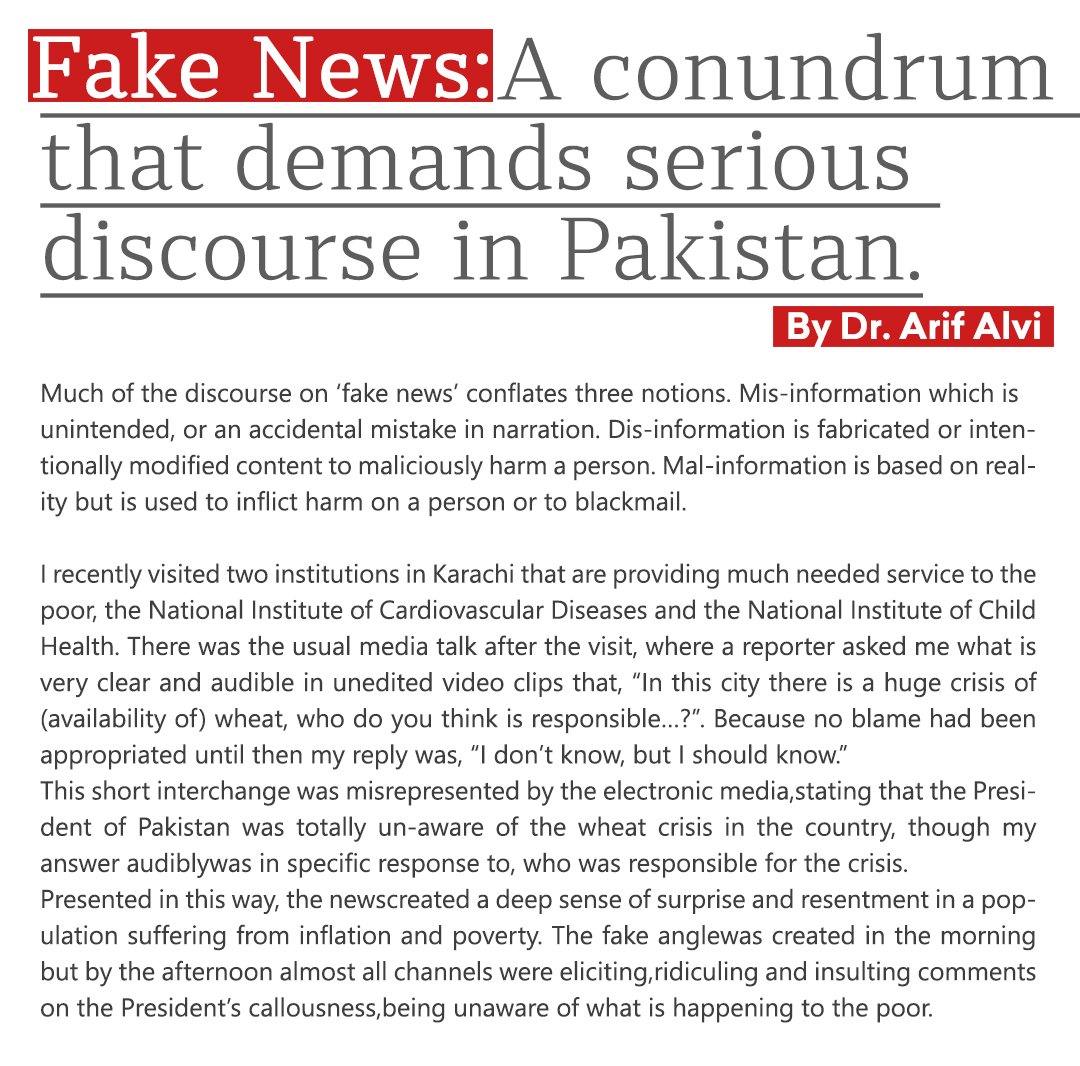 Digital Rights Foundation precisely wrote about the disseminating disinformation ahead of Pakistan by Pro-India accounts. You can read the details in the following PDF link.

Let’s talk a little about history!

As all of us know Indians and Pakistanis were live together in the subcontinent. They were called one nation. But when Muslims realized the injustice behavior of Hindus, they rose the slogan of being a different nation and demanded a separate state where they could live their own. In August 1947, partition was done and Pakistan came on the map of the world.

In fact the international border of Pakistan and India has a length of 3,323 kilometers. Now Four states of India share their boundaries with Pakistan.

Pakistan is the world’s 5th largest population country. Hindus make up the fourth-largest minority in Pakistan after India, Nepal, and Bangladesh. Other than these minorities, there are also several hidden Hindus living in Pakistan that spread violence. They enter Pakistan in disguise from different borders and some of them have arrested and among them, Kulbhushan Jadhav is the most dangerous one.

One of the main Indian detectives arrested in Pakistan is Kulbhushan Sudhir  Jadhav. He was arrested in Balochistan while crossing the boundary from Iran side in March 2016. He was a former Indian Navy Officer.

According to reports, he was involved in espionage and sabotage activities against Pakistan on the instructions of India’s intelligence agencies. Pakistan sent this Issue to the International Court of Justice. ICJ rejects India’s efforts to get Jadhav back.

Kulbhushan Jadhav himself confessed that he was involved in terrorist activities in Balochistan and Karachi. You can listen to the complete interview video that is published by down.com.

Another Indian Spy Arrested from Gujranwala

Even after the Kulbushan Jadhav case, Indian agencies have not paused on planning destructive activities against Pakistan. Another Indian spy has been arrested from Gujranwala. He has exposed shocking plans of the Indian RAW agency against Pakistan. FIA has arrested him on 5 days remand under the allegations of living in Pakistan with fake documents for more than 10 years. Find out more in the Youtube Video.

On the early morning of 26th February 2019, Indian warplanes crossed the de facto border and dropped bombs in the vicinity of the town of Balakot in Khyber Pakhtunkhwa province in Pakistan.

Pakistan’s military announced the airstrike done by the Indian planes as dropping their payload in an uninhabited wooded hilltop area near Balakot. Later that same day, India confirmed the strike, describing it as a preemptive strike against a terrorist training camp.

The airstrike was the first time since the Indo-Pakistani War of 1971 that attacking warplanes had crossed the Line of Control. As a result of the attack, a large number of deaths occurred.

On 27th February 2019, Abhinandan Varthaman who was a Wing Commander in Indian Air Force, flying MiG 21, and his plane crossed the Pakistani side. Pakistan shot down the jet and captured the pilot.

Pakistan is a safe country to visit. although there are several hidden Kulbhushan Jadhav working in it to spread terrorism in Pakistan and to destroy the image of this beautiful country. The intelligence agency and military of Pakistan work hard to control suspicious activities and apply strict vigilance to the sensitive areas.

Pakistan is a Muslim country that is achieved in the name of Islam. Islam itself means peace. Despite countless Indian abuse, Pakistan still promotes peace and reconciliation with India. The inauguration of the Kartarpur Corridor by Imran khan proves a soft spot for the Sikh community living in India. Hopefully, the relationship between India and Pakistan will go better in the future.