Aitzaz Hasan Bangash, a teenage boy whose martyrdom saved the lives of thousands of other children is really the pride of the Pakistani nation. Pakistani nation always remembers him and gives tribute to his bravery. He is really a true symbol of courage and patriotism. On his 6th death anniversary, several political personalities share their feelings on Twitter.

Shaheed Aitzaz Hasan Bangash stopped a suicide bomber from entering his school. He was 15 when he gave his life to save 2,000 students. Pakistan has not protected his family from threats and we have failed to honour him and his sacrifice. His courage and love makes me weep. pic.twitter.com/rXXArjTLnO

Aitzaz Hasan was born in 1998 in Khyber Pakhtunkhwa, Pakistan.

His father’s name is Mujahid Ali.

He had one brother and two sisters.

Aitzaz with his family lived in Hangu District within Kohat Division.

He was named a Shaheed and National hero of Pakistan due to his brave action of stopping a bomber from a Suicide Attack. 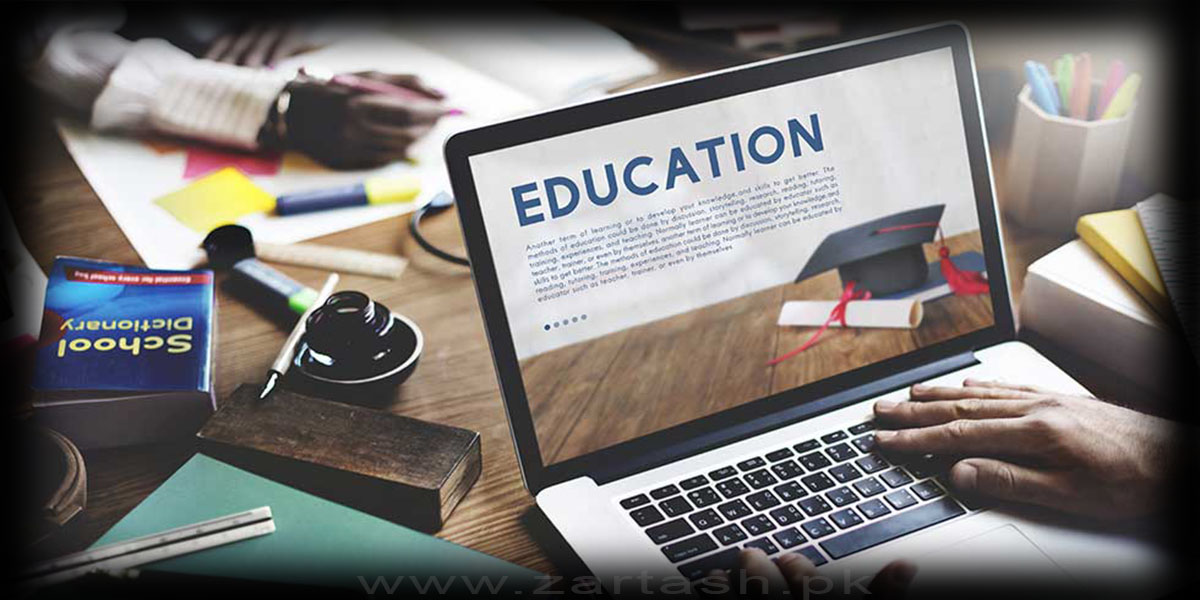 One of Hasan’s cousins named Mudassir Bangash stated him as a talented student who was skilled in all extracurricular activities.

On Monday, January 6, 2014, just before the school assembly around 8:20 AM, a suicide bomber wanted to attack a town school. Bomber first intersected with Aitzaz’s friends on the way and showed him to be a new student. He wore a school uniform but looked suspicious.

The friends clearly felt that the attacker was hiding a suicide jacket under his shawl. They persuaded him to stay outside of school. As friends went to help, the bomber also started moving. It was time to look for a place where there could be more damage.

But on the other hand, it was a time when his evil mission had to fail because he had to be tackled by the young boy Aitzaz Hassan. 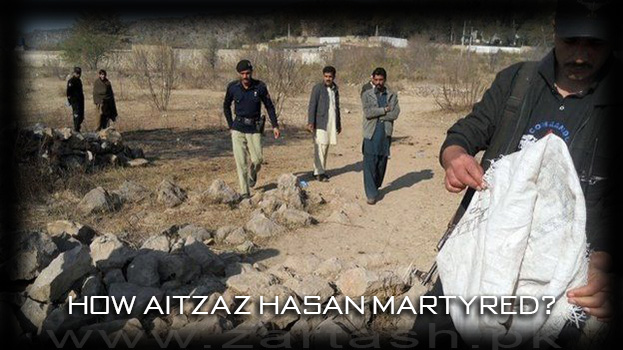 Aitzaz was also on his way toward the school at that time. He saw a suspicious man who looked twenty to twenty-five years old. Aitzaz tried to stop the man but the man started running faster towards the school. Aitzaz also noticed explosive-laden vests. He ran towards the bomber and grabbed him. He tried to keep him away from school. At the scene, the bomb was blasted and Aitzaz died.

At that time, there were approximately 2000 children present in school.

But due to the sacrifice of Aitzaz Hasan, no other students were harmed.

Aitzaz’s act saves the life of many children and captured the heart of all Pakistanis.

He was named as the Herald’s Person of the Year for 2014.

Aitzaz Hasan was really one of the amazing people of PAKISTAN. 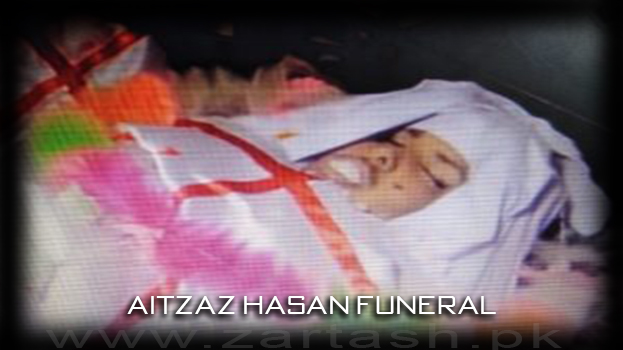 Several people attended the funeral of Aitzaz Hasan to pay their respects.

General Raheel Sharif who was the Pakistani Chief of the Army Staff at that time, said that “Aitzaz Hasan is a national hero, who has sacrificed his today for our tomorrow.”

A floral wreath was placed on the grave of Aitzaz Hasan on behalf of the Army chief of Pakistan.

Prime Minister of Pakistan Nawaz Sharif advised President Mamnoon Husain to present Aitzaz Hasan with the high civil award of Sitara-e-Shujaat (Star of Bravery) on behalf of the Government of Pakistan. The award was to be received by Aitzaz Hasan’s family on 23 March, Pakistan’s national day.

On 14 January, the representatives of the provincial government announced Rs 5 million for the family of Aitzaz Hasan and convert the name of his school to the “Aitzaz Hasan Shaheed High School“.

In 2016, a film named Salute was released in the honor of Aitzaz Hasan. Shahzad Rafique is the film producer and director.

Aitzaz’s story led to an outflowing of emotion on social media. On Twitter people used the hashtag #onemillionaitzazs to pay tribute to Aitzaz.

“Hangu’s shaheed Aitzaz Hasan is #Pakistan’s pride. Give him a medal at least. Another young one with heartstopping courage #AitzazBraveheart.”

“We the citizens believe that the State of Pk must award Nishan-i-Haider to Pk’s brave son Shaheed Aitezaz,”

A Facebook page has also been set up in tribute to his act.

Inspired by his extraordinary bravery and courage, Pakistan’s Prime Minister Nawaz Sharif recommended a bravery award for Aitzaz Hassan who was martyred when tackling a suicide bomber who targeted his school.

This was the most courageous step for any student to take at this age.

The Minister of Information in Khyber Pakhtunkhwa (KP) said on Thursday that,

Aitzaz was a real hero and true face of the people of Khyber Pakhtunkhwa.

Words by Friends, Family, and Political Parties After Martyr

“So he told them ‘I’m going to stop him. He is going to school to kill my friends. Aitzaz wanted to capture this suicide bomber. He wanted to stop [him]. Meanwhile, the suicide bomber blasted himself which resulted in the death of my cousin,”

“My cousin sacrificed his life saving his school and hundreds of students and school fellows,”

Aitzaz was a “real hero and the true face of the people of Khyber Pakhtunkhwa“.

On 12 January, the chairman of PTI (Pakistan Tehreek-e-Insaf) (PTI) Mr. Imran Khan announced a trust fund to be set up for Aitzaz Hassan’s family. 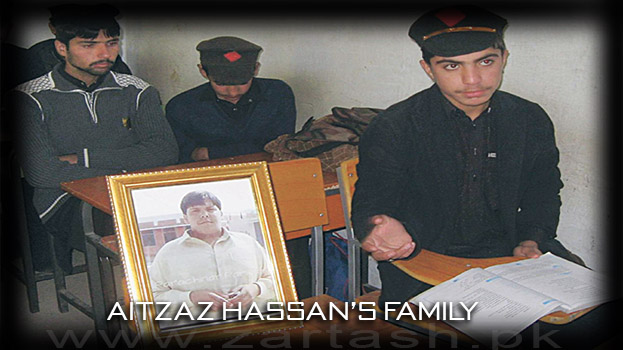 Is Pakistan a Country that Stimulates Terrorism?

Pakistan is a country that is acquired in the name of Islam and Islam is the religion of peace. Thus Pakistan is the symbol of courage and always teaches humanity.

Terrorists do not have any religion. They merely indulge in terror activities wherever they can. Terrorism has a big agenda. They want to separate children from their books.

But Pakistani nation is determined to continue the education and the death of Aitzaz Hasan is the proof of the Pakistani motive that always thinks of others.

Jamiat Ulema-e-Islam which is led by a politician named Moulana Fazal-ur-Rehman described Aitzaz as a “Mujahid”, and said, “he is a symbol of resistance against terrorism“.

Aitzaz placed others before himself. His act saved other’s life and protected many mothers from losing their children. The Pakistani nation is full of such sentiments to scarify themselves to save humanity.