I think everyone is familiar with the craziness of the Cricket Match in Pakistan. Cricket Match is a passion that let to produce a burning desire of winning in the population of Pakistan. From the child to the old generation, everyone shows likeliness to this game.

Pakistan Super League or PSL is a pleasant gift for the cricket fans. Since the PSL has been started, a vast population has shown interest to watch all matches. The running year 2020 also keeps Enthusiastic Talk about Cricket among the founders.

In 2020, PCB decided to held all matches in Pakistan. It was a piece of good news for cricket fanaticism people. This announcement had risen the security issues regard to the visit of foreign team members but it had proven that Pakistan is a safe country for tourism and the blame of terrorism is a cheap conspiracy of opposing countries.

What is PSL? When were PSL Matches Begin at First?

PSL is an abbreviation of Pakistan super league. It is a premier league of Pakistan twenty 20 cricket that was established by the Pakistan Cricket Board (PCB).

In this league, the players are categorized by the name of cities instead of having team names.

In PSL, there are 30 foreign players participate.

The inauguration of PSL matches was held in February 2016 in the United Arab Emirates. The purpose of this league is to promote twenty 20 cricket in Pakistan.

At first, it had to start in 2013, but due to some inevitable reasons, its beginning got late.

Now, PSL matches are started every year in the month of February.

PSL 2020 is the fifth season of PSL. It is also called PSL5 and it was sponsored by HBL.

The first match of PSL 2020 started on 20 February in Pakistan but due to the COVID-9 pandemic, all matches could not play and decided to delay up to an indefinite time duration by PCB.

There were a total of 34 matches that started from February 20 and end to March 22. Matches played across four international venues. Quetta Gladiators had opened the event at the National Stadium of Karachi. 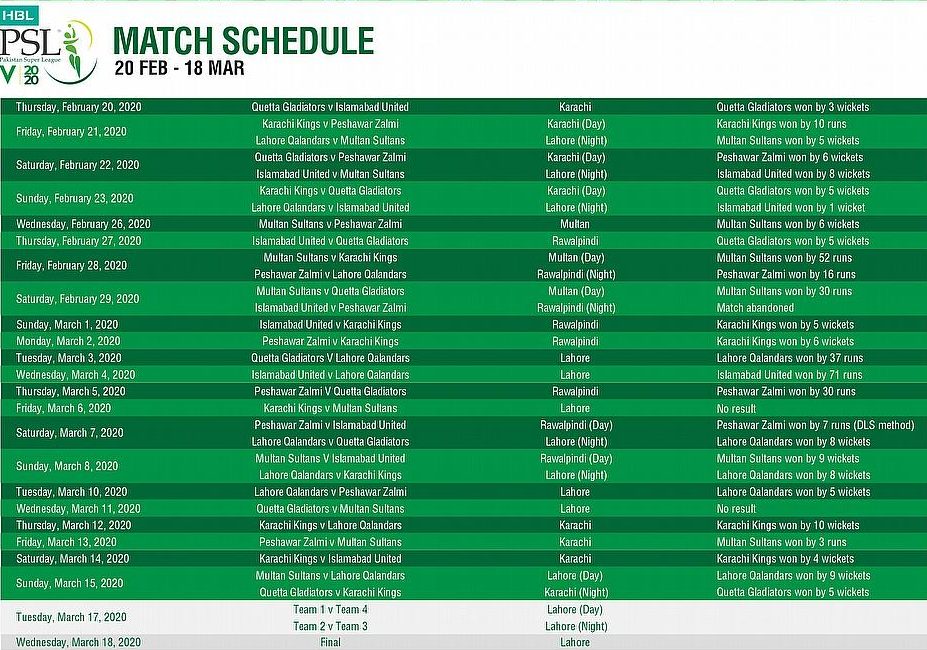 PSL 2020 point table after 30 matches were as follows: 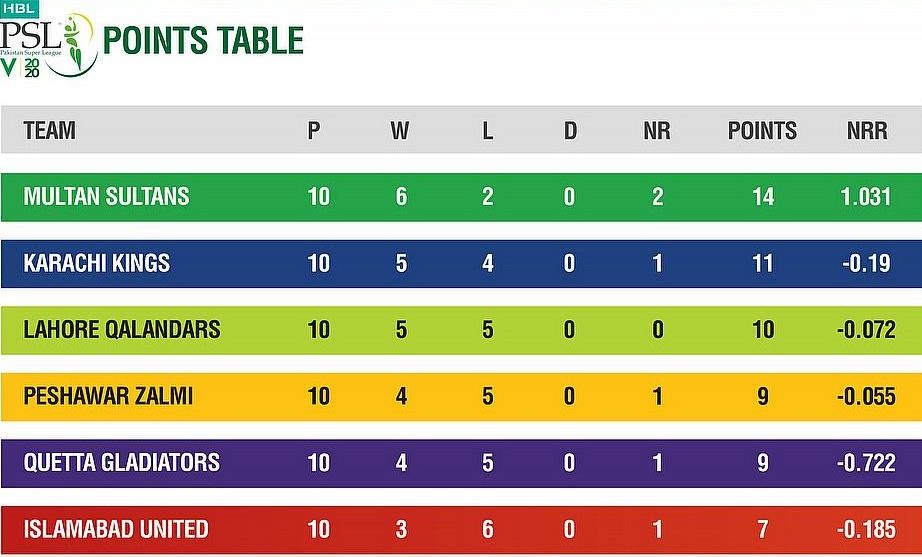 The semifinal and final matches could not play due to Corona Virus.

As this virus affected the whole world’s system. Some other events that annually celebrated in Pakistan, also banned such as the 23 March event was badly affected due to COVID-19.

When is the Schedule for the Remaining Matches of PSL 2020?

Everyone has wait to reach the final results of PSL2020 thus on seeing the interest of people, PCB decided to announce the schedule of remaining matches.

At first, it was expecting that the remaining matches will be played in the same year on November 12-18 in Karachi by maintaining good security precautions.

PSL IS COMING BACK

According to Cricket Pakistan, there is a possibility that the remaining matches may held in Karachi or Lahore in November. The playoffs of HBL PSL 2020 were called off with the rise of COVID19 cases in March 2020. pic.twitter.com/UNcZrmvJzT

But this announcement was too early. Now, on 22 September 2020, PCB had finally announced the dates for the remaining matches of PSL2020 that are as follows:

According to the new schedule, all matches will be held in Lahore instead of Karachi.

Although the remaining matches will play without the crowd.

If the pandemic condition will sufficiently in control then some of the audience should permit to sit in a stadium to watch the matches at the spot.

The deficiency in corona cases is proof that Pakistan is well prepared to face all challenges and it can better control all the issues to rise its status high in the world.

Royal visit to Pakistan is also the sign of integrity and wellness of our country.