In the time when the Pakistani Rupee is facing its lowest exchange rate in contrast to the US dollar, it is of utmost interest to people that what the history of the relationship of PKR and USD is since independence.

But some economists claim that there is no exact value one can ascertain as at the eve of independence Pakistan has no balance for borrowing outside so PKR was most probably equal to USD.

The other side says that the Pakistani Rupee was never equal to the US Dollars because Pakistan was a British Colony and his direct link was with British Pounds. PKR was pegged to British Pound.

A graphical description of PKR against the US dollar from 1947 to 2021 is figured below: 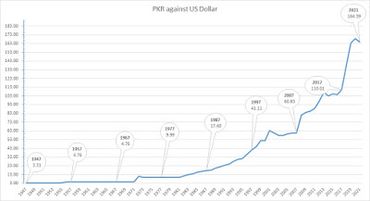 Pakistani Rupee Versus US Dollar

At that time the exchange rate.

The Highest Rate recorded is during PPP and PMLN era. Now it is also mounting in the Tahreek e Insaf government.

On Formation, this nation does not have its own currency. There was no central bank in Pakistan neither was any mint nor Texel. “For coping with this issue the Governor-General of United India passed a Pakistani Currency and Reserve Bank Order 1947 one day before partition on 13 August 1947”.

This Order made the Reserve Bank of India the common currency authority for India and Pakistan till the date of 30 September 1948.

It was to allow an estimated cushion period of 1 year for a newborn States to start its own currency.

Till that time the Reserve Bank was legal tender. On 1st April Pakistan inaugurated its Currency Notes with the inscription of “Government of Pakistan” both in Urdu and English.

For seven-month period notes of the Reserve Bank of India and the Government of India continued to circulate in Pakistan, at the top of the white area of those Notes was reserved for the watermark of the words “GOVERNMENT OF PAKISTAN”, inscribed in English, meanwhile, at the bottom of the white area the Urdu rendition of the same phrase appears, i.e.“Hakoomat-e-Pakistan”.

For inscriptions, purpose printing plates were modified for avoiding forgery instead of overprinting.

Despite all difficulties of no resources and brains, the Minister of Finance made it Possible to set Up the State Bank of Pakistan on 12 May of 1948.

The government issued the “State Bank of Pakistan Order, 1948” on 12 May 1948 under the authority vested in the provisions of Section 9 of the Indian Independence Act,1947 by the Governor-General of Pakistan.

After that efforts for making their own currency notes were intensified. Our initial notes of Rs 5, 10, and 100 were designed by Thomas De La Rue & Company of Great Britain. The 5-rupee note’s colour was deep blue, the 10-rupee’s colour was red, and the 100-rupee note was in rich green colour. Rs.1 and Rs. 2 Currency Notes were produced by Bradbury Wilkinson and Company of Great Britain.

1 Pakistani rupee had 16 ana and each ana having 4 paise, i.e. one rupee having 64 paisas and 1 anna was the basic unit in the form of the coin until 1960. After that Pakistan adopted The Metric System.